What Does MailChimp Do That HubSpot Cannot?

Short A: You're comparing 'apples' to 'orange' (literally). haha

Ok.First of all comparing MailChimp to HubSpot is like comparing Batman to Superman. Both may be superheros, but only Superman has native intrinsic abilities with or without his costume.

Like Superman, HubSpot has a great 'costume' -- their prolific inbound content marketing machine. Also, like Superman, HubSpot has cooler tools -- native smart lists which are auto-updated based on criteria you set giving you 'x-ray vision' into your CRM, and workflows which allow you to basically 'program' the automation around nearly anything you can dream of (within reason) -- sorta like making the Earth spin faster to travel through time.

When stripped of their costumes, MailChimp (like Batman) is absolutely no match for HubSpot.

In fact, it's not even a fair comparison. We're talking humans compared to aliens who gain superhuman strength simply being in the presence of a yellow Sun -- aka: HubSpotters! haha

Then decide which will best serve your needs because the costs of both purchasing and operating each are dramatically different. 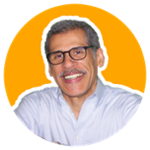